(Including the wards of Moreton and Knightley)

Our Mission is to improve the quality of life for those who live and work in the Parish ofÂ GnosallÂ and those who visit it.

Rights of Way in the Parish

Did you know that there are 115 public rights of way in the Parish of Gnosall, which of course includes Moreton and Knightley?  Some of these are footpaths, others bridle ways.  As reported some time ago a group is looking into these, checking maps and also the condition of paths.  Many people use the routes, either for pleasure, for horse-riding, or just for getting from A to B.  Here we are talking about rights of way which are on the Definitive Map of Staffordshire, so these are legal rights of access.

Our group was pleased to find that some landowners in the Parish have a very helpful approach to the right of way which runs though their property.  They have made enhancements to the path and surrounding area which mean that walkers who use the route have a more pleasant experience.  We have noticed the planting of an avenue of trees along a right of way, hedge-cutting, installation of a kissing gate and similar features.   Gnosall Parish Council has written to these landowners to express appreciation of their attitude to having a right of way through their property.  We would like to encourage others in our Parish to do something similar, so that everyone is able to enjoy the countryside in our beautiful area in a responsible way.

We have started to walk the paths and survey their condition.  We shall be making reports of any work that needs doing, or obstructions we find.  You may see us trying out stiles and other things along the way.  Already we have found paths which are impassable due to weeds.   In one case breeze blocks had been dumped by a finger post at the start of a path.  As this appeared to be fly-tipping it was reported to Streetscene who removed the blocks.  However, this comes at a cost to council taxpayers and may be illegal, so people need to be vigilant and if they see anyone dumping rubbish, if possible take some details down discreetly without endangering themselves and report it.

Surveys like this have been done in the past, but it is a long time since the last one.  Anyone interested in our work can contact the Parish Office and ask about the PROW Group. 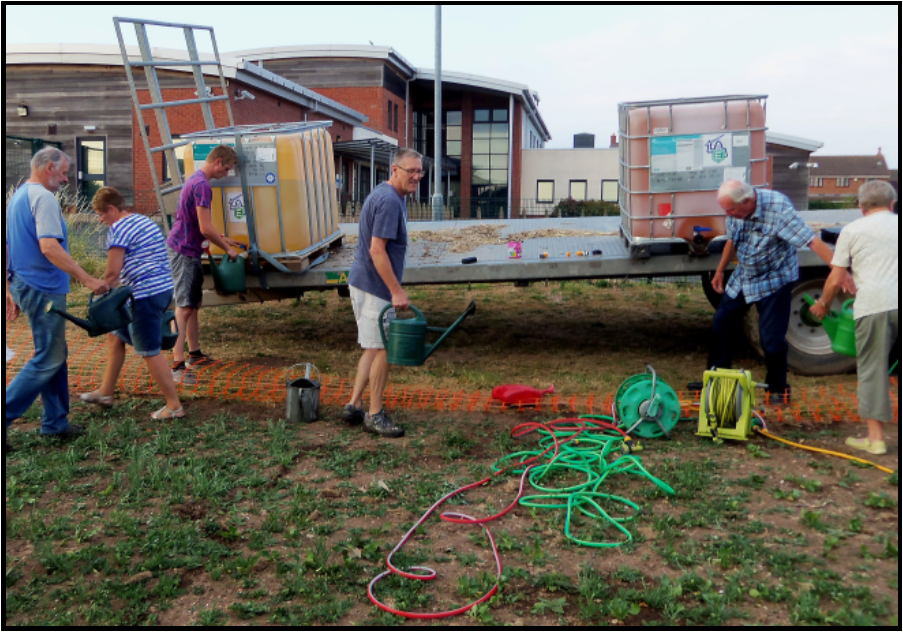 As previously reported, the Gnosall Parish Council granted the Gnosall Best Kept Village (BKV) team permission to create a wild flower patch on the Village Green, near the Gnosall Surgery.

Work started in the spring, preparing the ground and sowing the seeds. But since then we have had a very hot and dry summer. On two occasions Fred Tomkinson, the local farmer, provided a trailer with 2,000 litres of water which the BKV team then sprayed the patch with the aid of watering cans. Also, the Gnosall Fire Brigade used one of their training sessions to spray the patch with more water.

The result was a fabulous growth of thick weeds that overcame the development of the wild flowers! In early September, on the advice of the wild flower seed providers, the BKV team resprayed the patch with weed killer, then remover all dead and dying plants and reseeded the area with new seeds. The wild flower patch has been tidied-up, removing the orange plastic fencing but leaving a simple outline string fence to indicate the area of the patch. A big Thank You to all members of the BKV team and local people for their comments and support.

We now look forward to 2019 when the Cornflowers and Poppies will flower followed by all the perennials in 2020 - a great eye-catching patch of wild flowers, from May through to September.